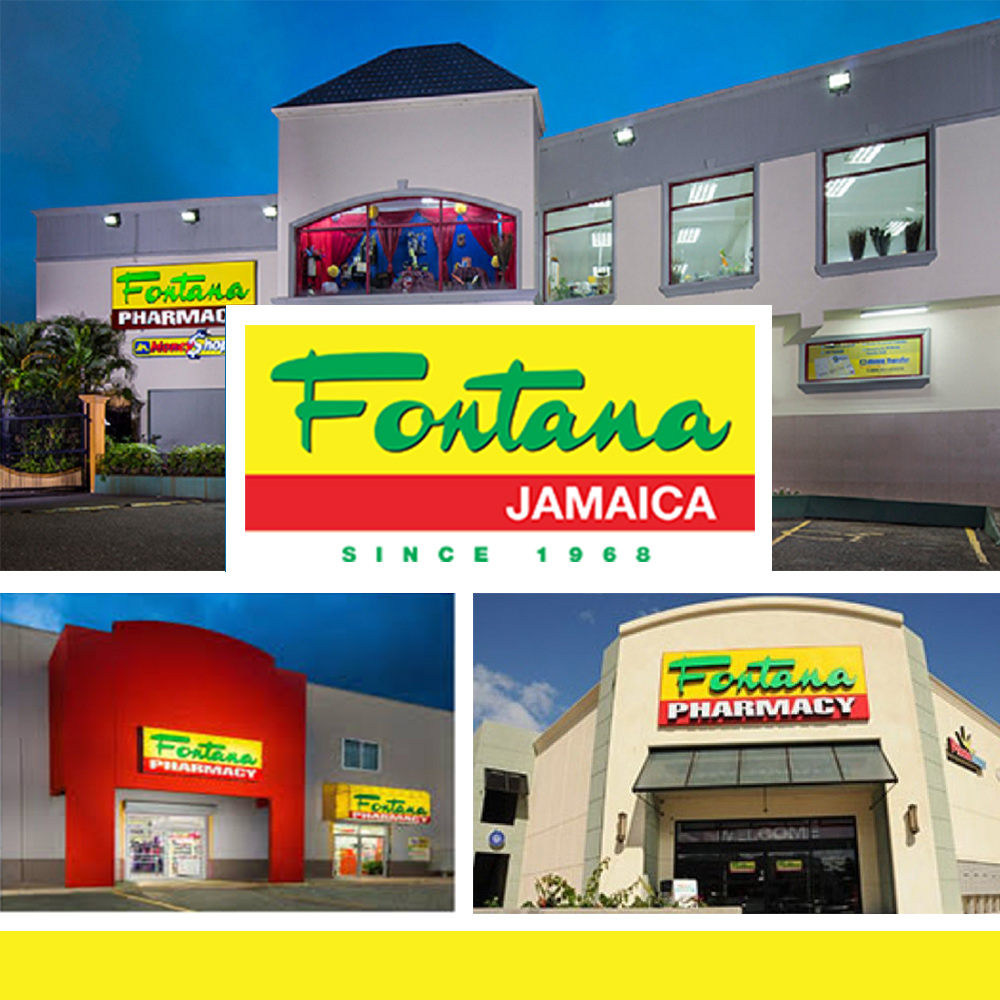 The company’s performance has been commendable over the past five years with revenue and net income growing by a compound annual growth rate of 13.87% and 41.92% respectively.

Fontana Limited started operating in 1968 at the Manchester Shopping Centre by Shinique “Bobby” Chang and Angela Chang. Since then the company has expanded its reach across Jamaica, operating a network of pharmacies and retail stores through five different locations across. The company also has an e-commerce presence, with an online shopping platform that serves customers island wide and abroad. Fontana originally offered health and cosmetic brands but has branched off into various product lines that includes household essentials, school and beauty supplies. Fontana’s core business remains the selling of pharmaceuticals through licensed pharmacies.

The company is currently managed by Chairman – Kevin O’Brien Chang, CEO – Anne Chang and Chief Operating Officer – Raymond Therrien, along with the support of independent directors and a team of 330 employees. Fontana continuously seeks new prospects to expand it network and profitability. At present, Fontana is constructing its biggest and flagship store at Waterloo Square, which will open in 2019.

The financial performance and brand image of Fontana is testimony to 50 years of hard work. The company’s performance has been commendable over the past five years with revenue and net income growing by a compound annual growth rate of 13.87% and 41.92% respectively.

Despite the ongoing state of emergency in Montego Bay and road works that took place in Barbican Square, Fontana has managed to grow revenue and net income year over year. We also view the company’s business model positively, and have a positive outlook. Its e-commerce site has enabled it to have extensive geographic reach, catering to customers both locally and abroad.

For the first quarter of the company new financial year we saw a growth in revenue and net profit of 5.51% and 352.89% respectively, when compared to the same period in the previous year. Additionally, the completion of the Waterloo store is expected to significantly improve profitability. As such, we are recommending Fontana as a BUY. 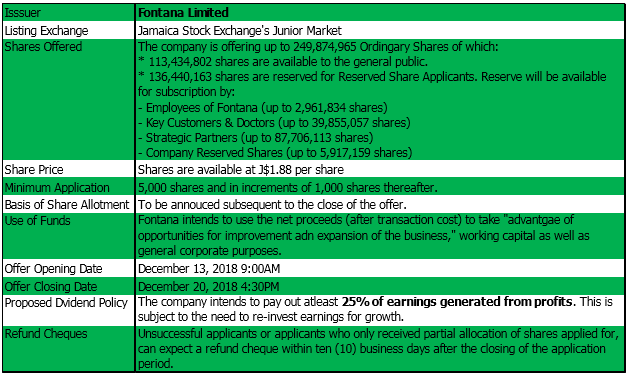 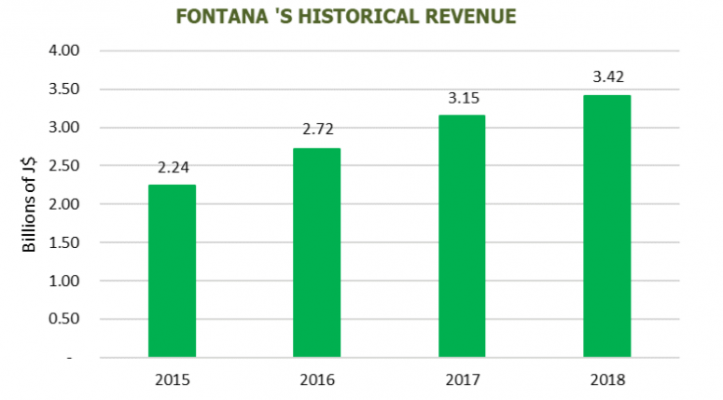 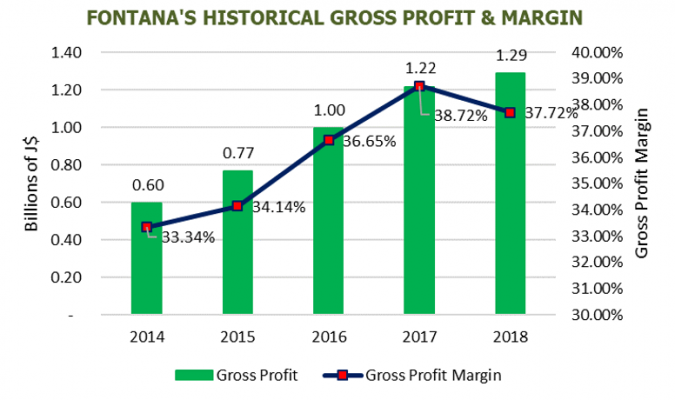 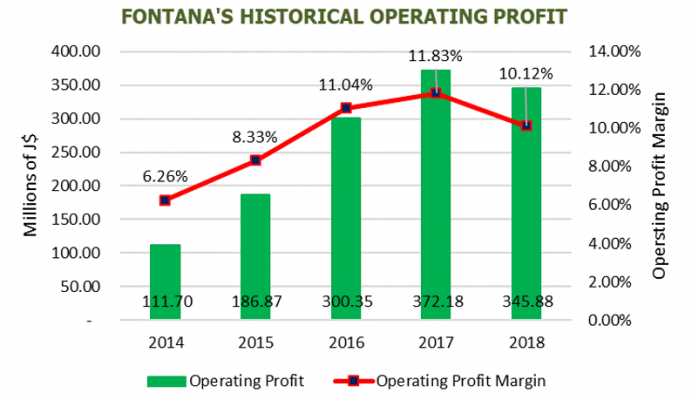 The uptick in expenses was also felt in the company’s bottom line profit. For the first time in five years, Fontana saw a decline in net profit. For FY 2018, Fontana achieved J$247.31M in net profit, a 5.56% or J$14.55M decrease when compared to the previous year. Despite the decline, net profit remained within its three year high at 7.24%. 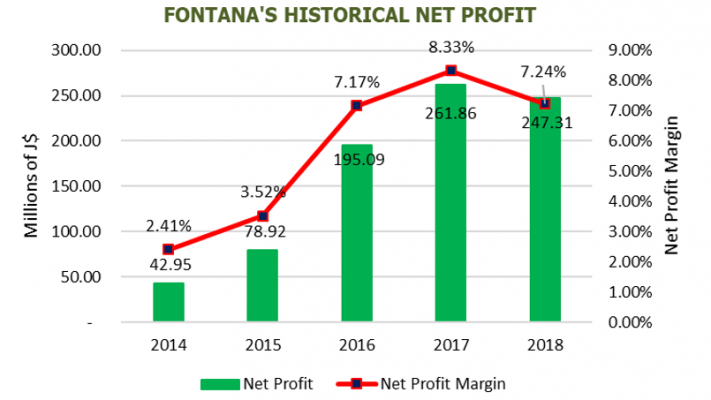 Fontana’s positive results continued into the first three months of operation in financial year 2019 (Q1 FY 2019). The company’s unaudited financials reveal that the company generated revenue of J$935.81M in Q1 2019, surpassing the performance reported in the same period in Q1 2018 by 5.51% or J$48.83M. This followed through to the gross profit, Fontana reported gross profit of J$295.72M; growth of 24.90%, or J$58.95M. A decline in cost of sales translated into a higher gross profit margin for Q1 2019.The improvements in revenue and gross profit followed through to net profit, the company reported a net profit of J$52.05M for Q1 2019. This represent a J$40.56 or 352.89% improvement when compared tot eh same period in the previous year. 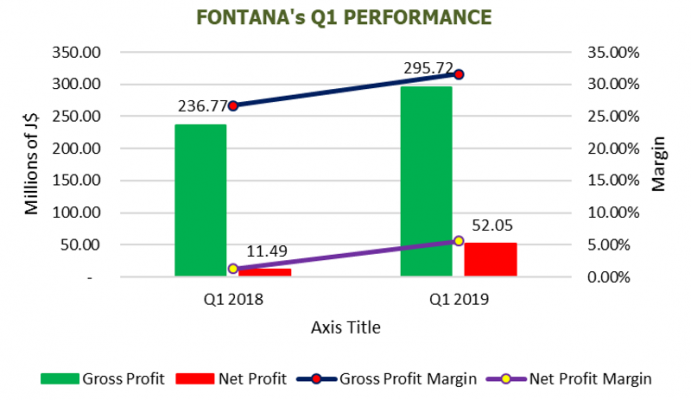 As at September 30, 2018 (the end of Q1 2019) Fontana held assets valued at J$1.49B. This was a 10.92% or J$183.74M decline relative to total assets as at June 30, 2018 (the end of FY 2018). The decline in assets was predominantly due to a decline in noncurrent assets. The company transferred building holdings in Montego Bay to related company Fontana Properties Limited, resulting in a decline in Property, Plants and Equipment (PPE). 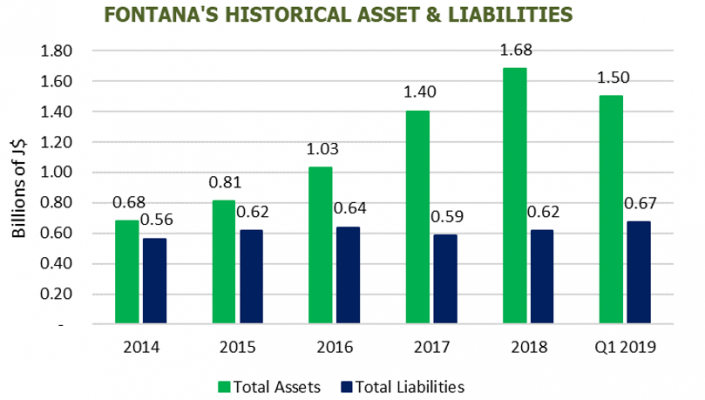 Conversely, the quick ratio saw a significant decline, moving from 0.87 times as at the end of FY 2018 to 0.52 as at the end of Q1 2019. A quick ratio of 0.52 times is an indicator that the company would not be able to cover all their debts without the inclusion of selling inventory. This is also an indicator that much of the company’s current assets is invested in inventory. 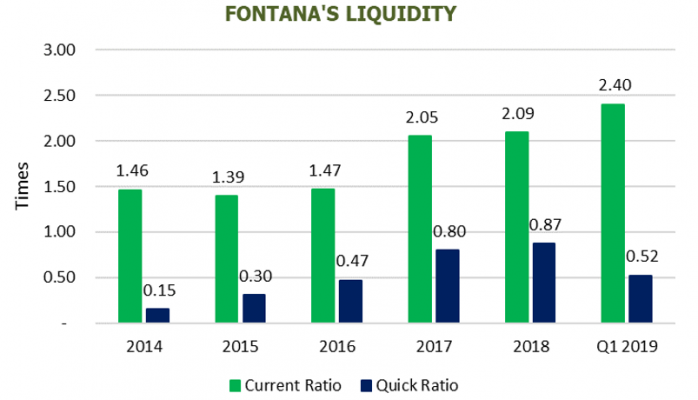 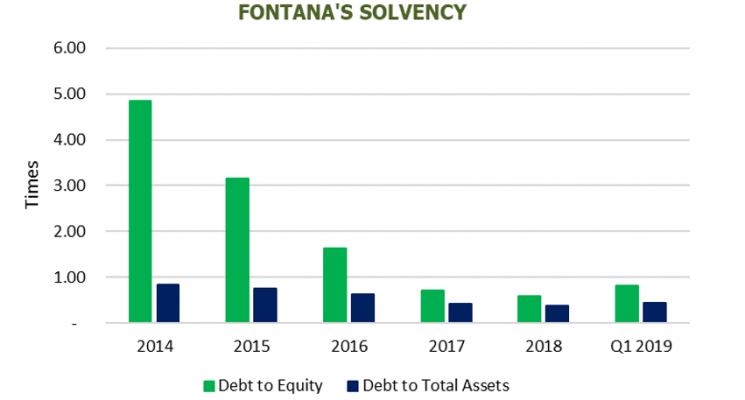